Time has passed since the the last post about anything but maps, math, statistics, and so on. A lot has happened in the meantime - work at MapBox has reached a peak of intensity and stayed there, with our launch of maps on Foursquare leading to a continuing hockey-stick graph of traffic growth.

I’ve been working quite a bit. That’s my taskwarrior history - tasks are added at the top of lines and finished at the bottom. They’ve been adding up. Or at least it was my fault to add things like “build a guitar amp from scratch”, and “listen to all my unplayed music”, with 2,073 songs to go, leading to a few month-old tasks. Eventually a sort of vacation-via-productivity-guilt should occur.

DC has decided to rebuild itself again, retooling most structures into condos. My walk to work includes a vista of nine cranes at a time, so they’ve integrated themselves into my consciousness in such a way that all-too-deep thoughts center on crane affairs.

I read Leaving the Atocha Station, watched THX 1138 and [Battle Royale](https://en.wikipedia.org/wiki/Battle_Royale_(film), and listened to Blonde Redhead, Islands, and Way Yes.

I presented at Where 2.0 (now renamed just Where), with Dave Cole from MapBox. Next week is FOSS4G-NA, which will feature a significantly more wild presentation.

Where was in San Francisco, which made it infinitely better than previous versions in San Jose, even if the Groupon wave startups had mostly burned out and the resulting crowd was an odd combination of traditional ‘social media’ and a few hard-art visualization folks. 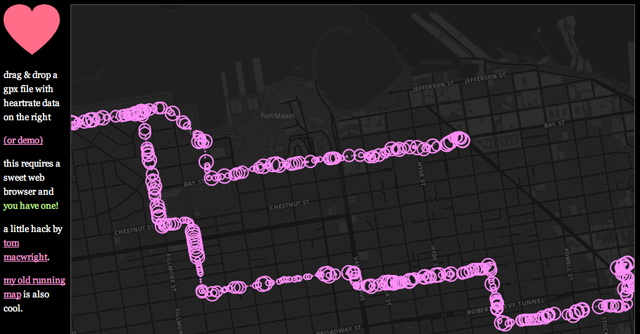 While I was there, I wrote a quick demo of a running map called Ventricle, which you should check out. It’s a variation on the concept for my previous running map, which aims for extreme literality: circles pulse at the precise bpm recorded by my dorky heart rate monitor.

It required some fooling around with Math.sin() math since it uses a singular draw loop (see the source), but I think it’s accurate.

If you have a similar geeky watch and a new enough browser to support FileReader, you can drag & drop a .gpx file on the map, and the map will locate and show your run.