How the Law is Compiled in Washington DC

Last time we talked about how the Law is written and passed in Washington DC. DC’s system is more complex than most because it isn’t a state: Congress has ultimate power over its laws and thus the DC Council, its legislative body, has multiple ways to expedite the process.

A ‘bill’ is a document that adds, removes, and changes laws.

The ‘law’, like the DC Code, is a compiled document constantly being changed by bills.

A bill, for instance, could contain the provision

c(1) No later than February 6, 2009, the Mayor, pursuant to Title I of the District of Columbia Administrative Procedure Act…

In programming terms, a bill is a changeset. Or it’s like track changes in Microsoft Word. That is, bills aren’t new versions of the law, but rather instructions you can follow to create new versions.

Here’s how the process works for Washington, DC.

The DC Council discusses and edits bills in Microsoft Word or WordPerfect format. They’re emailed around, collected and edited just like any other document.

When bills are passed, staffers add them to the Law Information Management System, a .NET web application that stores and serves metadata and PDF downloads of resolutions, bills, and more. Here’s an example of a ceremonial resolution proposed in 2013.

This Law Information Management System, or LIMS, is hosted by the Council’s own server, owned, operated, and even hosted in DC. It’s a Windows server running IIS which handles about 0.5 requests/sec before timing out. But it’s entirely their property, and thus the contents of the LIMS are very clearly the property of the DC Government. 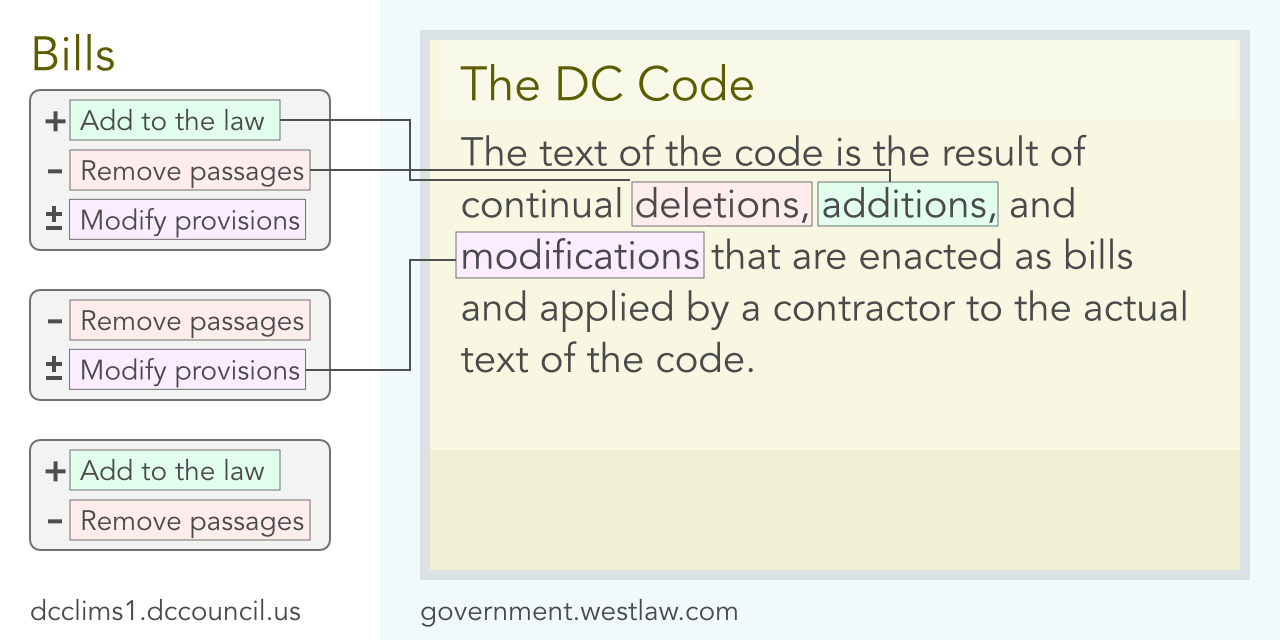 Each bill is then downloaded by an employee of the company that wins the contract for maintaining the bill. This person must hold a law degree from an ABA accredited law school, and they cannot be a subcontractor.

Every two weeks, these employees download the bills from the public server and apply their changes to the code. The contractor stores the full code in a proprietary database with a content management system.

The contractor then provides services around the compiled law, and contractually is the only provider of the ‘official version.’ They are the only business or government entity to possess a full digital copy of the code.

DC’s bills and laws are public domain: what does this mean, legally and practically?