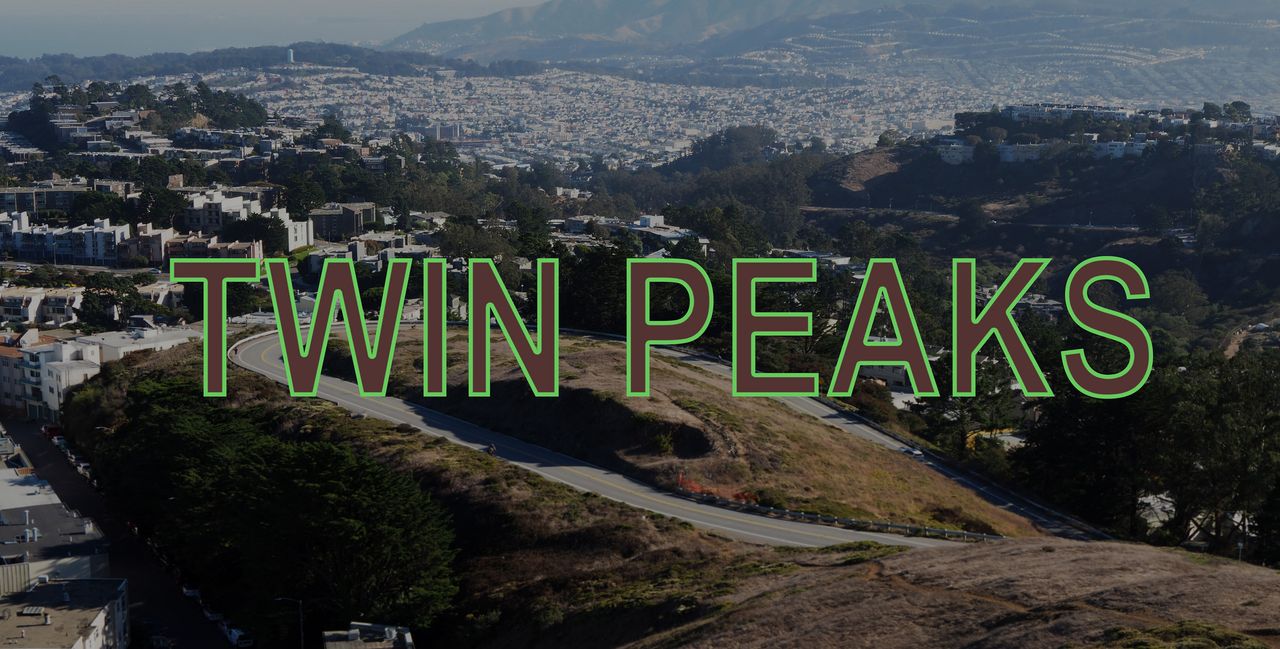 Twin Peaks is my favorite. I’ve climbed it more often than any other hill. Just reaching the top reminds me of nights when the city was bright but there were no tourists crowding the top, or when it’d be drizzling near the peaks but running back down reverted the world to the weather I had before. It’s the most prominent of a line of hills stretching from Buena Vista down to Corona to Twin Peaks, Billy Goat, and Mt. Davidson, forming a ring around the bustling and hip core of San Francisco, that insulate the sprawling and monotonous Sunset neighborhood and affect the wind and influence the famous microclimates of the city.

The views from Twin Peaks are incredible. You have to head up one of the stair-lined paths to get a 360° view of the city, but an even better way to experience the view is to run around the west side of Twin Peaks Boulevard, seeing different compositions of hills and buildings.

Twin Peaks isn’t covered with imported trees, and it doesn’t have flowers or berry bushes like Buena Vista. There are a handful of planted trees at Christmas Tree point, but I think the motive is obvious: they serve only to hide the radio towers and utility buildings there.

I never paid much attention to the towers until my last trip up. San Francisco is fiercely protective of its natural space and especially paranoid about cell towers, so I wondered how these big ugly towers could end up right next to one of the city’s premier outlooks. So, via SF Planning, I learned that the towers are city-owned, unrelated to any cellular or television network, and used primarily for police and firefighters. So I guess they got a pass.

The SF Parks and Recreation Survey of Twin Peaks from 2006 is a lovely read about the wildlife of the hill. I especially enjoyed this passage:

Seven surveys for reptiles and amphibians, totaling approximately 36 hours of field effort, were conducted at Twin Peaks in spring 2000 (Paquin and Reading 2000). These surveys, conducted by walking transects, did not result in the observation of any reptiles or amphibians.

Update: Twin Peaks was already a phenomenal running destination, but in April 2020, the city decided to make it permanently car-free, which elevates it to an unprecedented level of great.

I contend that Twin Peaks is the #1 hill in San Francisco for running. It has everything: a ring path around the hills that gives you a continuous, panoramic view of the city, and plenty of road routes that mete out the significant elevation gain without overwhelming grades. Twin Peaks is tall - it’s the second-tallest hill in the city, at 925 feet — but relative to the approaches of, say, Tank Hill or Corona Heights, it’s far more runnable.

One of the best things about Twin Peaks is that there’s a bonus third hill at the south end, which is never crowded with tourists, is incredibly satisfying to climb, and has an exhilarating singletrack descent. It’s absolutely lovely.

But there’s a lot more to the story. Let’s start with this passage from the SF Parks document:

Soils have been mapped as the Barnabe-Candlestick soil complex, a mixture of very gravelly sandy loam and fine sandy loam. Twin Peaks is predominantly characterized by thin rocky soils over native Franciscan bedrock. Twin Peaks is different from many other Natural Areas within San Francisco in that the majority of its users are confined to the roadway and paved overlook area. Thus, for the amount of use the area receives, the impact on native vegetation is relatively low.

You don’t have to read between the lines to see the oddness of this situation: those tourists I’ve alluded to many times didn’t bike up the hill or even walk up it: nearly everyone you see at the top drove there or arrived in a tour bus. Which in one sense is a boon for preservation. If all those people of varying athletic ability and willingness to sweat could only reach the top through human ability, there would likely be desire paths through all the easiest approaches. But since they got there with cars, their impact is minimal. Just some footsteps on pavement and possibly walking to one of the peaks via the stairs.

Public transit is of no use near Twin Peaks. The surrounding neighborhood is dominated by expensive houses with filled garages. Market Street becomes a 4 lane divided highway around the west edge and pedestrian accessibility becomes a cruel joke near Market & Romain, where a footbridge ensures that cars can drive as fast as possible, and the sidewalk disappears from the street and becomes a narrow tunnel above it. The sidewalk moves off the road again near Short Street, replaced by free onstreet parking.

But then there’s the other thing: in one of their most fantastically pro-human decisions, San Francisco closed one side of the hill to traffic in 2016, extended it till 2020, and they’ll consider making the closure permanent in 2020. This is really one of the best things about the park, and I’ve seen the success of the change every time I’m up there: there are kids talking, skateboarding without having to look around for cars, cyclists enjoying this small bit of freedom, people walking and realizing just how big a road is. The last time I was there, I overheard a person ask her group whether they should walk on the right, and then they all just laughed when the realized the whole idea of being so cautious wasn’t inherently necessary.

So, Twin Peaks is both a source of shame for this San Franciscan, that a neighborhood just next door to Noe Valley and Haight Ashbury can be so disconnected from their transit systems and so tied to car transit – but also pride that the park at the top has successfully chipped away at the menace of automobiles and created some magical space for humans.

The radio towers are ugly, and there isn’t much else up there. The surrounding neighborhood has history, but it’s not good history: racist housing policy and bad garden suburb planning strategy. You go to Twin Peaks to experience a simple, beautiful hill, the freedom of a car-free road, and to look at the city.

I’ve never had a sandwich on top of Twin Peaks. Though I love it, as this post makes too apparent, I don’t think it’s really the place for a sandwich. I can cite anecdotal evidence too: I’ve never seen anyone eating a sandwich up there.

I bet this is for a number of reasons. Like the other bare hills in the city, Twin Peaks is very windy. And there’s no obvious place to eat a sandwich except for Christmas Tree Point, the lookout pictured above, where you’d appear in the background of many tourist photos. And there aren’t benches, tables, or anything that’d encourage loitering at the top.

The overall score is not an average of the rest, and only pedantic consistency keeps me from giving this hill a 7/5 for running. To me, novelty doesn’t matter as much as the experience of climbing a hill, the view from the top, and the joy of a carless road. Running up Twin Peaks as the sun sets is a true joy.

2
Sandwich
…read all the other hill reviews