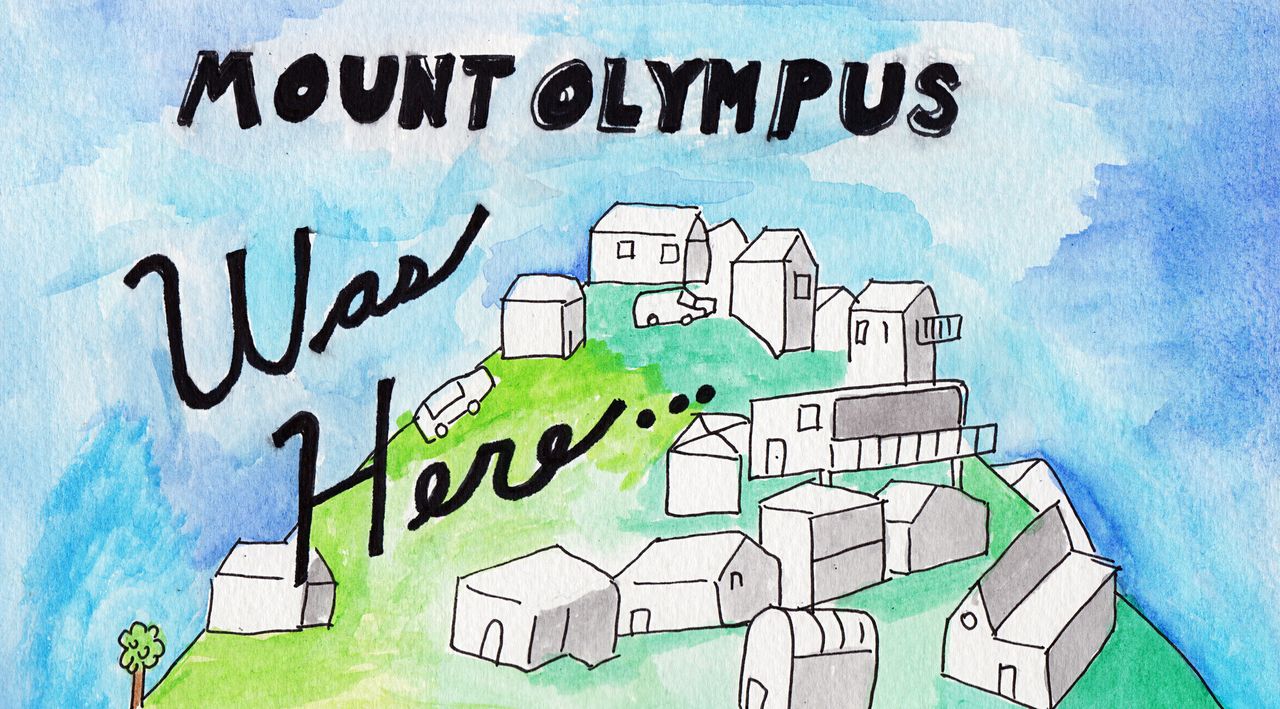 To describe Mount Olympus, we have to start by asking: ‘what is a hill?’

A hill used to be a mountain that was under 1,000 feet. Mount Davidson, the tallest hill in San Francisco, is 928 feet tall. But the distinction doesn’t really apply anymore. A hill is also a park, in all the cases I’ll encounter. It will generally be maintained by San Francisco Recreation & Parks, but not always: Mount Sutro is mostly owned by UCSF. Mount Davidson has a cross on it which is now owned by The Council of Armenian American Organizations of Northern California. But, generally hills are owned by the people.

Thus, hills are places for people: anyone with mobility can get to the top and enjoy the view. But inversely, hills tend to be places for the rich: we have the idea that crime doesn’t climb, which is truthy, if not supported by hard evidence. Housing on hills is expensive - partly because it tends to require a car (the city has barely connected hills to public transit), and partly because views are valuable.

But hills like Twin Peaks, Bernal Heights, and Corona Heights provide better free views than even the best-placed apartment. All you have to do is walk or perhaps drive, and there you are, with the world surrounding you.

So, let’s return to Mount Olympus. I walked up the hill on Thanksgiving morning to ponder it. It had featured in my runs occasionally, but I wanted to consider what it really is.

Mount Olympus is an intentionally isolated place for people who own homes there. If you don’t live there, it doesn’t matter to you.

This wasn’t always the case. It was once considered the center of the city, and the peak was similar to that of Tank Hill or Kite Hill. It once featured a lovely statue called the ‘Triumph of Light’, and until at least 1955, you could see it the statue from across town. I can only imagine the view from the peak and the feeling of the place. Photos and illustrations from this era are surprisingly rare.

Anyway, the statue started to crumble, and people defaced it, and it was removed by the city, stored somewhere, and then lost.

Here’s what Mount Olympus is now:

This is the pedestal that once held The Triumph of Light. Despite holding nothing for the last sixty-plus years, it still features spikes to keep people from stealing something. There’s nothing there.

Here’s where we ceded public space to cars. Where there could be pedestrians, or grass, are cars. The 30+ parking spots at the top aren’t enough, so people park illegally.

Here’s another view. Trees have been added, as well as disappointing plants.

Here are some of the plants. You can spot an Aeonium - native to the Canary Islands. There’s an Aizoaceae from South Africa. The plants on this hill are essentially the same as the ones growing on the stoops of the buildings that colonized it.

Here’s an SFGate article about Mount Olympus. Every photo of the view is taken from inside of one of the houses that covers the hill. Which is exactly what these houses have done to this hill: they’ve annexed the view into private property.

The view that you can get without buying an apartment: well, it’s limited. Here’s what it looks like:

And here’s what the view looks like, a few feet to the right.

Perhaps this wasn’t intentional, but the insult of letting bushes cover all but a minuscule porthole to the world is some sort of cruel joke. The view was just too expensive to give away for free.

The best view of Mount Olympus is this one. These are the property values in this area.

Whether you think this is acceptable or not comes down to your values, your politics, or whether you think views and public space are worth more than real estate. You can reflect on the housing crisis and read this as a positive - that we’ve used this space to house people - or the negative, that the housing is exclusive, car-dependent, and incredibly low-density.

I hope that I’m not fading into some sort of gauche environmentalism when I regret what happened to this hill, even though my sense of what it was in the past is so fragmentary. In the current San Francisco environment, I can’t help but point to this hill and say ‘this is where the density should be and where so much of the blame should lie’. After all, one resident tried to buy the land to keep it public, and was prevented from doing so by the neighborhood association.

I’m happy to take anyone up on an offer to review the view from Mount Olympus, just in case one of my readers owns a four million dollar house on the hill. Until then, here are the ratings.

1
Sandwich
…read all the other hill reviews