The Lumina is a webcam, the first product from a company of the same name. They offered me one to test and write about. So, take that into account (#ad?), but none of these links are affiliate and my darned honesty prevents me from lying for money.

For context, webcams are mostly bad. Even companies that make great cameras, like Apple, make terrible webcams. Nobody understands how Apple’s webcams are so bad, even in new products. The webcams that Wirecutter recommends are awful.

You don’t have to care about webcam quality, because the bar is so low. But I’ve always cared for images and lighting, and I’ve been recording documentation videos for Placemark and attending a steady number of video meetings. So I want it to look good.

There are two standard solutions to the problem of crappy webcams, and both involve not using a webcam:

But now there are a lot of webcams trying to add a third option. There’s Elgato’s Facecam, Razer’s Kiyo, the Opal Camera, and the Lumina. The Kiyo is near the bottom of the market at $100, and the Opal, at $300, is the top. So the Lumina ($200) is the middle.

I can’t write about a new webcam without mentioning computational photography, the overarching term for algorithms that use photo, video, and even depth information, mix it with some machine learning, and try to get good quality out of mediocre cameras.

But now cameraphones have tiny sensors and tiny lenses but produce amazing photos by some combination of software and technological advancement.

Honestly, a lot of computational photography makes me uneasy. The fake bokeh, the smoothing, the face retouching, it’s all sort of hyper-real. But I like what the iPhone produces because it’s subtle enough to look like a good “normal” photo.

The reason for that tangent is that the Lumina does computational photography. A lot of it. It detects your face and smooths it, detects the background, and adds some blur. It has face-tracking too, like Apple’s Center Stage feature. 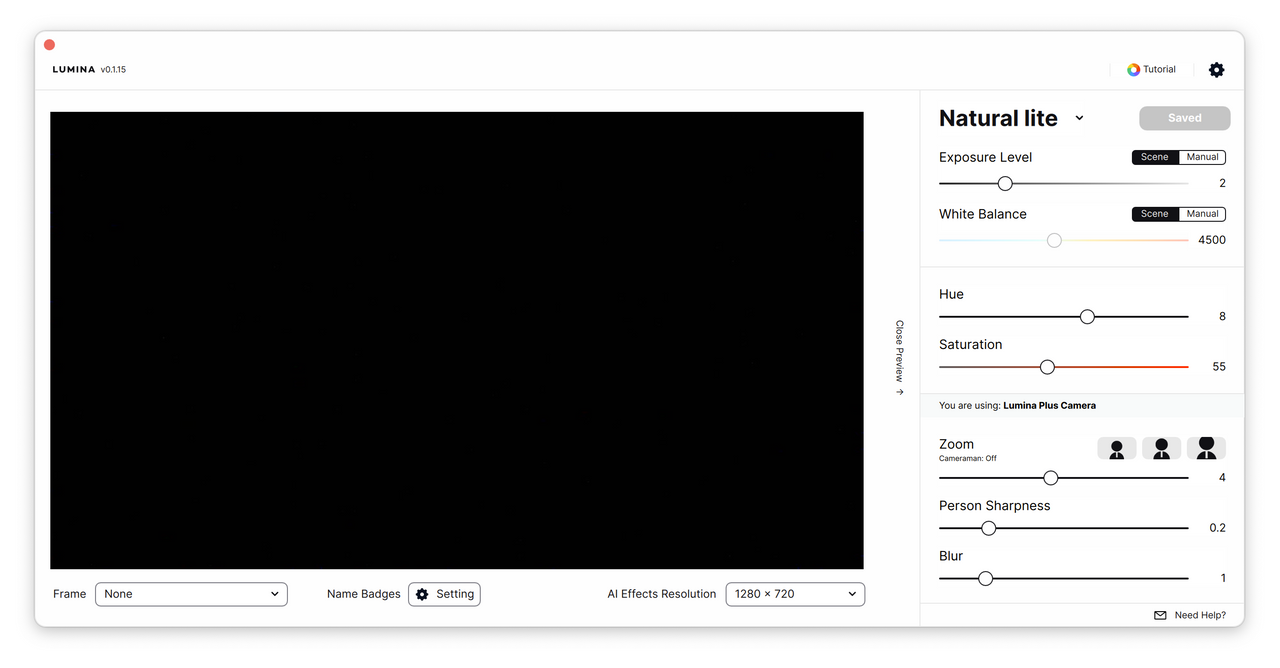 I tried these features with their defaults and turned most of them off. The background blur would keep my guitar in focus. The sharpening and blurring was dialed up way too much for my taste.

But once it was dialed in, the Lumina looks pretty good - dramatically better than my computer’s webcam, and noticeably worse than my iPhone but in a video meeting setting it’s more than sufficient.

The software is okay, but not perfect. The Lumina control panel is a Qt application, so in my opinion it’s better than an Electron app. But doesn’t feel as native as a Mac application like Camo.

I think I’ll keep using the Lumina for video calls. Clipping my iPhone into a mount and plugging it into my computer is just a tad annoying. Today I did a usual meeting and just clicked the Lumina on instead of doing the whole ritual. I’m not going to get another iPhone just to use it as a webcam with Camo, though I know of folks doing that.

Even with tweaked settings, I have some gripes the Lumina’s images. Skin tones tend to be kind of pink, and the contrast is often too much or too little. A lot of fine details are lost, whether through the AI or the hardware’s ability. That’s not to say it’s a bad webcam - it’s a good webcam, maybe even great - but it’s hard to say that the quality measures up to the iPhone’s tech, or a standalone camera.

So I’ll probably keep using Camo for recorded videos. The iPhone’s quality and its automatic adjustments are so good. Without any manual adjustments, it usually nails the exposure, focus, and other details.

So: until Apple creates a webcam on a Mac that works as well as their phone cameras, there’s some utility to a standalone, improved webcam. I think the Lumina is a solid option for that, once you’ve changed the default settings and reduced all of the machine-learning magic. That said, I’m interested to see how the Opal stacks up when it’s released.

Oh, and if you’re wondering how you record two webcams at once, the answer is OBS! Then I process the video with Handbrake and put it in object storage.