Hello again! I skipped an ‘end of the year’ post in 2019 because the retrospectives and goal-setting I was reading made me feel odd, and I didn’t want to add more of that to the world. I do have plans (oh I have plans), but most of the big quantifiable elements of my life that I established with the help of ‘personal metrics’ are now established, and I’m happy to focus less on the numbers.

Some career news. I left Observable in December and joined a new gig in 2020, which will be public once we’re ready – which will be soonish. Observable’s growing rapidly and building some really cool stuff.

On to the subjects: books, blogs, music, a second brain, learning music.

In 2019, I started reading more fiction and memoir. I’ve read comparatively little fiction: I could never find a genre I reliably enjoyed, and when I did find some niche, the novels in it started to feel familiar quickly. But 2019’s highlights were great: the easy-reading 24-Hour Bookstore, laugh-out-loud funny Look Alive Out There, and wacky Priestdaddy. I’m working on another one right now – Conversations with Friends and enjoying it, too.

In the gap between the years, though, I attempted to read a lot of business books. This drained my energy pretty quickly. My appreciation for how hard it is to truly master management and business is matched with an amazement for how apparently easy it is to top the bestsellers lists without saying anything in your hip business book. It’s a genre that should mostly be blog posts. Which explains why the Basecamp books seem like stand-outs, and there’s a thriving market for summaries (getabstract and blinkist).

So I’m still partway through Extreme Ownership. It’s not bad, but stylistically it’s totally absurd: you’ll read about some combat situation with lives on the line, and how it relates to a supplier problem at a paper factory. As some reviews have pointed out, the casual militarism is upsetting at the least. The basic concepts feel familiar: the ones that have been useful to me are things like Commanders Intent and the basic idea of ‘the buck stops here’.

This gets at the heart of the reason why we’re tied to China economically. It’s economically productive for the 1% to maintain a trade relationship with China. The financial incentives don’t help any Americans, and in fact, most of us are hurt by this relationship.

Drew DeVault is a phenomenally productive developer. Him writing about China felt important to me.

Each of us became a wanderer in a sea of content. Each of us adopted the tacit—but still shameful—assumption that we are just treading water, that the clock is always running, and that the work will never end.

Robinson’s piece about the death of iTunes describes the current computing world so well. I wrote about my music hoarding strategy, which is one of the ways I try to route around this.

Another example is address books. When I stopped using Gmail and switched to Fastmail in 2018, I started using an address book again. Fastmail has great CalDAV support, so my contacts sync between my computers, phone, and different apps. I use Cardhop to make my desktop contact-adding easy and quick. But suddenly: this kind of information is finite and knowable. I rejoice in getting notifications about people’s birthdays without a social network in the middle and having addresses on hand to send out physical cards if I so please. Once contacts were switched from being an automatically inferred infinite pool to something I maintain, I care, know, and use them more.

The industry’s persistent inability to outperform public equities is a disappointment to investors, and a very real threat to the sustainability of the VC industry as we know it.

Diane Mulcahy’s We Have Met the Enemy… and He is Us was a pivotal read for me, and her 2014 article Venture Capitalists Get Paid Well to Lose Money both summarizes the original and points to how VCs could do better. My even shorter summary would be: VCs (venture capitalists) are investors in companies, who mostly invest with money from LPs, which are countries, unions, large companies – any entity with enormous amounts of cash. For example, the money that SoftBank gave to WeWork, Zume, Mapbox, and other tech companies was sourced from Apple, Qualcomm, Saudi Arabia, Foxconn, and Larry Ellison’s family office, amongst others. VCs act as another investment vehicle, sort of like stocks, bonds, or investing through a hedge fund, but as Diane points out, many of them underperform the simplest equities.

Although Alibaba and Tencent may be technically impressive on software development, their business success is mostly a function of the size of the market and the social, regulatory environment. The ubiquity of mobile payments is due not just to technological innovation (substantial though that might be), but also the financial regulatory regime and the leapfrog over credit cards. Ecommerce works great because China has built first-rate infrastructure and because many migrant workers are available to deliver goods in dense urban areas.

Dan Wang’s 2019 letter laid out a story of technology in China that’s very convincing and coherent. I’ve been thinking about China a bit and also just watched Wired’s documentary on Shenzhen, being drawn in by Andrew ‘bunnie’ Huang’s charisma and the hyper-dense urbanism of the city. The Wired video was odd: it spends a lot of time talking about China’s electronics markets, but almost no time on production, and it hypes the inventiveness of Shenzhen but gives few examples of things actually invented there.

I’m posting a song a day on Twitter. I even set up a recurring todo list item for it, so you know I’m serious.

I’ve mentioned Nnamdi Ogbonnaya before - from his art rock to math rock to wacky rap, there’s a talent and charisma that makes his career exciting to follow.

I was late to the game on post-hardcore - a few DC bands like Two Inch Astronaut brought me into the fold. Chicago’s Slow Mass is another great interpretation of the genre.

In the last few years, I’ve been fixing my ‘information systems’ - how I organize documents, thoughts, and tasks. For each:

In the last few months, I switched from Zotero to DEVONthink, which is paid instead of open-source, but it’s the good kind of paid: perpetual licensing with an independent company on the other side. Plus, it has a bunch of pretty outstanding features like this one: 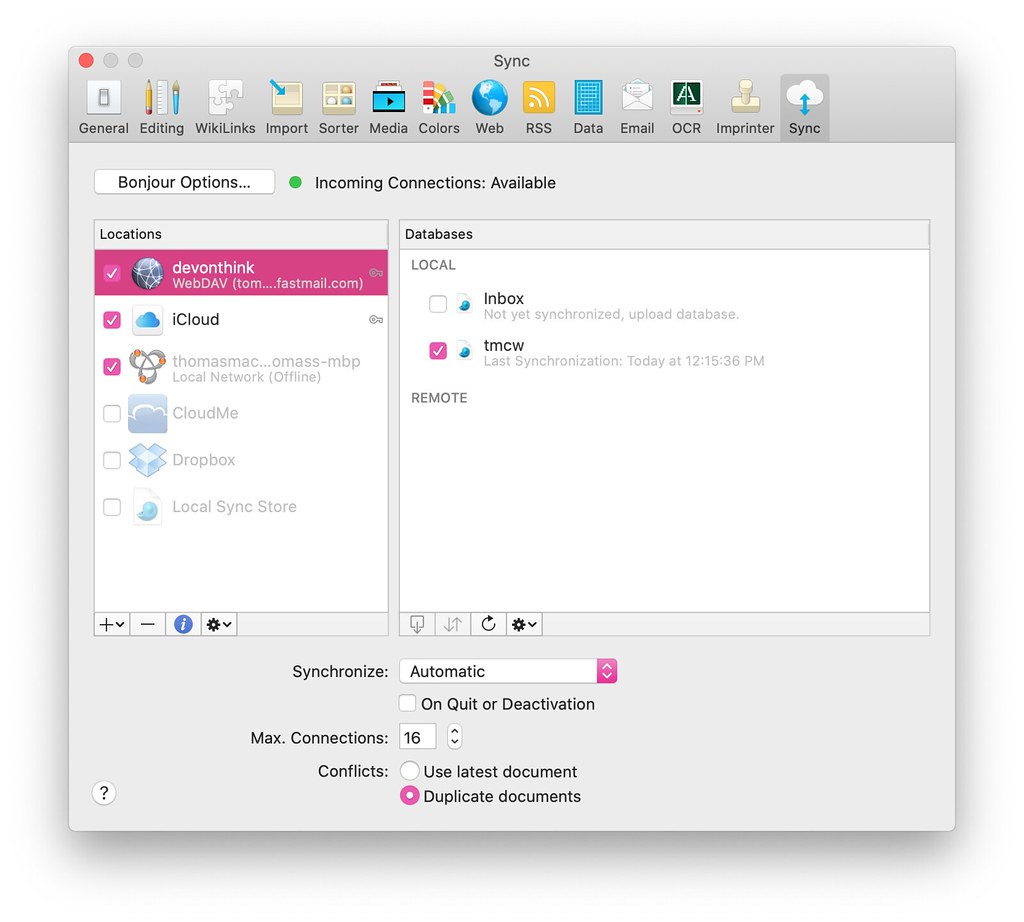 Imagine that: a product that doesn’t encourage you to use a proprietary sync service but piggy-backs on existing systems like iCloud, WebDAV, and Dropbox. There are other pretty compelling perks, too: the software has great OCR so that your scans are automatically searchable, and it improves on Zotero’s ability to save webpages with its option to save clutter-free websites, thus cutting out the Google Analytics script tags and other garbage common on the current web.

The downsides of DEVONthink, as far as I’ve currently discovered them, is that it only lets one of your computers access the database at a time, and that adding your own notes to the system is not particularly easy or friendly: it’s mostly for documents you import from elsewhere.

But for personal document management, I think it’s the best thing out there, and there are sadly few other good options. Maybe Yojimbo?

But there’s a lot more action on the notetaking side. Just in the last few weeks, usejournal, roam research, and Emvi have made some splashes. Then there’s Notion, the king of knowledgebases at startups, and Dropbox Paper, that company’s attempt to become a user-facing application, and a whole bunch of tools aimed at businesses like Guru. Then there are apps like Bear competing on looks and fit-and-finish.

Roam seems like the most interesting option, because it introduces a few ‘new’ concepts, like bidirectional links and transclusion. They’re new in the sense that most tools don’t have them, though I should be clear that transclusion is the same concept as ‘include’ statements in programming languages, and Observable import statement is probably the most interesting implementation of the concept out there. And bidirectional links were core to the Project Xanadu, um, idea.

Reading through Roam’s white paper and considering the state of this space brings up a few ideas:

First, I’ve never been a believer in ‘mind maps’ or similar visual representations of knowledge. Mostly because they fail to define edges: the connection between ‘items in a list’ and ‘steps in a series’ is glossed-over, whereas in text the difference between a bulleted list and a numbered list is clear. Plus, you usually use words to describe how the list relates to its context. And the vast majority of mind maps turn out to be purely trees, because no two branches connect, and thus are fully equivalent to nested lists, a format that has none of the layout disadvantages of a visualized graph.

But this gets into a little bit of theory of mind: other people’s internal representation of thoughts is wildly different than my own. Perhaps loose networks is a 1:1 representation of their thinking, and thus using a tool like Roam doesn’t require people to do any sort of translation. But on the other hand, some of my mind is a loose network, but I consider the process of straightening it out and formalizing its structure to be the core of the act of note-taking, not some chore that ‘systems’ impose on me. Reforming those thoughts, writing or typing the ideas, is what makes them stronger. As my beloved Field Notes say on the back cover: “I’m not writing it down to remember it later, I’m writing it down to remember it now.”

Second, there’s that concept of links. The kind of links that we have on the web - one-way, breakable, meaningless - is the only kind that most folks are exposed to. There are some tools that show links in reverse, like Wikipedia’s what links here page. There have been different manifestations of linkback systems on the web, but they’ve all been plagued by abuse. How Project Xanadu attempted to get around this was setting Rule #8 as “Permission to link to a document is explicitly granted by the act of publication.”

I wonder if semantic links (triples 😬) would resolve my issues with the meaningless of linking, by giving links meaning. Then you’d be able to differentiate ‘mentions’, ‘subsets’, and other sorts of relationships, in exchange for a more laborious method of inter-linking. It might resolve some of the issues with Roam’s graphs, which just look absurd to me: they’re just too much information and not enough meaning. Or maybe, at the core, I think that notes are more about things than connections.

One of the things I’ve been keeping in DEVONthink is music: guitar tablature. classtab is a godsend for classical guitar music, and I relied on some now-defunct sites for clawhammer banjo and jazz tabs. Those disappearing was a good reminder that it’s always good to keep copies, which I do by default - a pinboard copy if I add something to Instapaper or bookmark it, and a hard copy if I add it to DEVONthink.

Music is not just reading tabs, though, and Toned Ear’s ear training is really fitting with what I want to learn: I’ve had mediocre single-note relative pitch, but lousy chord recognition abilities. It’s also a great homemade application that was clearly written by someone who cares about the subject area.